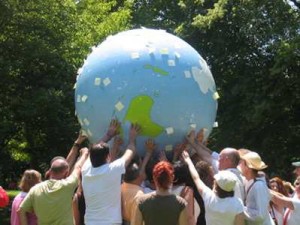 What Holds the World Together in a Plague

A Parable from Environmental Health Science

You have probably heard the popular nursery rhyme, the original version of which is:

This song refers to the occurrence and consequence of the great plague of London of 1665 which spread via fleas from diseased rats to the human population resulting in great loss of life.  By the time the Plague reached epidemic proportions, the King and his court, as well as most clergy and physicians, had deserted London and left its poor to fend for themselves. Sir John Lawrence, Lord Mayor, remained to assume control of the city. Staying behind also were his friend and personal physician, Dr. Edward Harman; the Reverend Dr. Thomas Vincent, and a scientist named John Graunt, whose interest in statistics and trends helped to predict the spread of the disease.

The aforementioned persons showed unfathomable courage in a time where the slightest human contact could lead to excruciating death.  In a wonderful play covering the epidemic, The Living, by Anthony Clarvoe, premiered in 1993, we have Graunt, the father of health statistics, recounting the story and reflecting, at its conclusion as follows: We know so little. And we don’t know much. So people ask me if we learned anything during the plague.  And I say we did. Newton did. He came up with something, just as I said, and he taught it to us.

Those of us who lived. Plague spread to Cambridge, you see, and it closed for the duration, everyone scattered. Newton found himself on a lonely country estate. Nothing to do but take walks and think. One day, he walked in an apple orchard, noticed an apple fall to the earth.  Have you heard the story? Looked at that apple. Really looked at it, no one had before, not really. Wondered what it meant. Wondered if he could describe what had happened mathematically. Tried. Did. Learned that when we fall to the earth, the earth also falls, a little, towards us. So that in fact there is no falling, but a moving toward. Tremendous thing. What Newton found: that the world would fly to pieces, but for a great force, a power in every single body in the world, which pulls it ceaselessly towards every other body, which is pulled ceaselessly toward it in turn.  No matter what.  We learned what holds the world together, in a
plague.