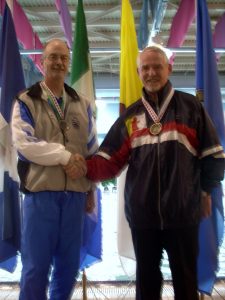 Making a splash for Nunavut

Nunavut has made its mark in a national swimming pool, thanks to the efforts of a Kivalliq water hound. Fred O’Brien, 61, of Rankin Inlet loves to swim, and that love of the water led him to three medals while representing Nunavut at the 2004 Canada Senior Games in Whitehorse,

Yukon, this past month O’Brien earned gold in the 50m breast­stroke, silver in the 100m breaststroke and bronze in the 50m freestyle. This Year marked O’Brien’s third appearance at the gams. having represented the Yukon in 1998 in Medi­cine Hat, Alta., and in 2002 in Summerside, PEI.

his year’s Games, however, were a unique experi­ence for O’Brien. “Being the only Nunavut athlete at the Games, I was all alone in the parade followed · by about 400 from Ontario,” says O’Brien.

“They were happy to have Nunavut represented and I · was warmly received by everyone there.”