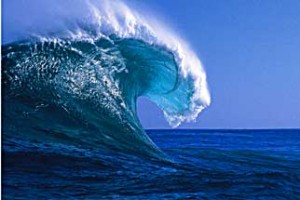 Generation of Waves by Wind

The renowned astrophysicist, Arthur Eddington, provides a mathematical and poetic ‘explanation’ of the generation of waves by wind in the book of his lectures The Nature of the Physical World. These ‘explanations’ are but two of the many ‘models’ that humans draw-on in exploring the physical environment on which our health relies. The full text of Eddington’s lecture is found at: giffordlectures.org

Maintenance against viscosity, by suitable forces applied to the surface.

where k and α are prescribed, thence the value of η.

Thus we find where σ2 has been written for gk + T′k3 as before.…

a wind of less than half a mile an hour will leave the surface unruffled.

At a mile an hour the surface is covered with minute corrugations due to capillary waves which decay immediately the disturbing cause ceases.

At two miles an hour the gravity waves appear.

“Our theoretical investigations give considerable insight into the incipient stages of wave-formation”.

There are waters blown by changing winds to laughter

And lit by the rich skies, all day. And after,

Frost, with a gesture, stays the waves that dance

And wandering loveliness. He leaves a white

A width, a shining peace, under the night.

Explore how we are informed by patterns disclosed in nature and are moved to be in full solidarity with one another in all the professions, trades and disciplines so as to promote and maintain sustainable environmental health governance practices.