“No man is an island, entire of itself: Every man is a piece of the continent, a part of the main; if a clod be washed away by the sea, Europe is the less, as well as if a promontory were, as well as if a manor of thy friends or thine own were; any man’s death diminishes me, because I am involved in mankind; and therefore never send to know for whom the bell tolls; it tolls for thee.” John Donne

Environmental degradation is vigorously impelled by egotism, greed and selfishness and appears spontaneously in societies fragmented by dominating structures and mechanisms. The fact that deplorable environmental conditions played a significant role in encouraging a new spirit of solidarity sweeping across Europe and that environmental improvement is seen as a major priority in the new democracies emerging cannot be disputed and points to a significant sign of our times. Fragmented knowledge creates a veritable ‘Tower of Babel’ effect and is environmentally destructive.

The field of environmental health management covers a broad range of activities and embraces an approach that values professionals with skills in quantative, demographic and social analysis; knowledge and appreciation of the epidemiological method, of environmental, behavioral and communications inputs, and of administrative and legal structures and procedures; and who have benefitted from exposure to management and educational strategies embracing inter-sectoral approaches. Environmental health personnel in several countries fulfill roles that touch on the responsibilities of several government departments and utilise the methodologies appropriate to the different sciences in evaluating the great variety of risks associated with developments at the fringes of the new technologies.

The biogeochemical equilibria which sustains life on earth has been significantly modified by mismanagement of the environment.  Threats to human health, such as: depletion of the ozone layer in the stratosphere, presenting increased ultraviolet radiation; global climatic change and deforestation, with consequent changes in the earth’s water cycle; contamination of internationally traded foodstuffs with biological and chemical contaminants and pesticide residues; increases worldwide in the risk factors associated with poor food hygiene and in the incidence of diseases spread from animals to man – these and other examples point to the need for a global perspective and approach in environmental stewardship.

A modern approach should view the environment in an interrelational way, and emphasizes the contributive role of the social partners, rather than the fragmentation of knowledge into sectoralised areas where overspecialization predominates.  In Urban Systems in Crisis, Frederick Vester suggests that:  “Only when we accept the fact that, even in our civilization, not only are factories cross-linked with each other, not only rivers with each other, not only the vegetable and animal worlds with each other, but also river systems with factories, factories with consumer behaviour, consumer behaviour with tax law, and this via national development planning with the location of factories, this with a change in traffic volume, which in turn is cross linked with human settlement structure, and this perhaps with criminality and drug abuse, can we begin to hope to make the right decisions and thus find the right solutions.”

A global viewpoint opposes the vicious circle syndrome that has tended to dominate society, creating structures and practices that fail to meet the environmental challenges that face us and do violence to the people that work within them.  Sectoralization is promoted at second level education leading students to select well circumscribed third level courses.  Graduates are recruited by sectoral government departments that only welcome into their fold qualifications specific to a narrow frame outlook, accepting the most specialized of the qualified group.

The linear thinking outlook that blames badgers for the failure of animal disease eradication schemes, claims that grazing goats cause global desertification, and ignores human health, safety and welfare criteria in environmental decision making must not only be challenged, but must be replaced by an approach that recognizes the true nature of our fragile earth, where not only is no man an island, but no scientific discipline; no state, semistate or private enterprise can ignore the environmental and social consequences of its activities.

The International Federation of Environmental Health as a worldwide alliance of national organisations, each operating on an equal say basis by virtue of a flexible Constitution allowing those unable to attend meetings physically to avail of its postal voting rights, calls upon all environmental health professionals to participate fully by supporting the Federation and by encouraging their national representative body to join as a full Member exerting its own unique and very important influence on global environmental health. The shape and policies of the Federation will be determined by its constituent members: and its abillty to read and respond effectively to the signs of our times requires a whole new spirit of solidarity. 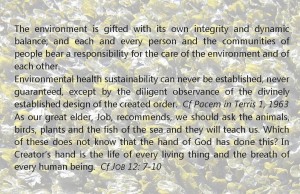