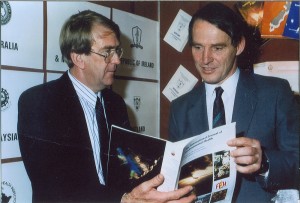 Over the period September 15th to October 7, 1988, as chairman and representative from Ireland of EHOA and Vice Chair of IFEH, I visited:

The trip was in connection with:

The Society of Public Health Inspectors of Singapore hosted a lavish reception and lunch for representatives of the IFEH Council travelling to the Congress. I attended the lunch, experienced the great hospitality of our Singaporese colleagues, and had the privilege of visiting the Department of the Environment and environmental health offices there. In addition to being introduced to a traditional Chinese breakfast downtown during the Chinese festivities at the time, having a swim at a local pool, environmental health issues and developments were discussed and explored by the international EHO group in a very special part of our world. In addition to sharing with the many local and most welcoming officers there, I recall meeting with Professor Graham Ashworth of the U.K., his wife Gwynette, Fred Osborne, IEHOs Representative on the IFEH Council, and his wife Christine. While in Singapore I had the opportunity of exploring and obtaining a number of important environmental health reports, journals, and health education and publicity materials. My recollection is of a wonderful visit, of unique food fare, and of a strong wish to return sometime to renew contacts with wonderful people and build on the strong friendships established.

I arrived in Sydney on the evening of September 21, 1988.  On September 22nd  arrangements were made with the printers, Netan Pty Ltd. Artarmon, NSW for delivery of the IJEH to the Congress.

On September 22, 1988 I chaired the Council Meeting of IFEH and proposed the adoption of the Declaration of Sydney, which, with some adjustments and refinements was accepted and passed unanimously. As IFEH’s first policy statement, the Declaration of Sydney pledges the Federation’s support to the Declaration of Alma Ata, which declaration launched the WHO Health for All strategy in 1978. A copy of the Alma Ata document was circulated to IFEH Member Organisations prior to the Council Meeting and was printed in Vol.1, No. 1 of the International Journal of Environmental Health and distributed to congress delegates.

The declaration was announced to congress delegates at the opening of the congress at Sydney Opera House by the newly installed President of IFEH, Ron Spratt, President of the Australian Institute of Health Surveyors.

The Inaugural World Congress on Environmental Health was opened at the Sydney Opera House by Sir Ninian Stephen, Governor General of Australia, on September 26, 1988. Some 1300 delegates from 23 countries attended. The congress was organised by the Australian Institute of Health Surveyors under the auspices of the International Federation of Environmental Health.

On October 3rd and 4th I visited the Queensland Institute of Technolgy, Brisbane, and obtained information on the Batchelor of Applied Science (Environmental Health) course and on opportunities for environmental health graduates from Ireland in Australia. A prospectus of the QIT School of Health Science and article on Environmental Health Legislation and Administrative Procedures in Queensland was obtained.

On October 5, 1988 I travelled from Brisbane to Singapore and on to Kuala Lumpur, Malaysia.

On October 5, 1988 I visited the Health Department at City Hall, Kuala Lumpur and met with senior personnel. Discussions were held on local environmental health issues and local programmes and strategies were outlined. An annual report of the department was obtained and a tour of the local food markets was provided.

On October 7, 1988 I visited the World Health Organisation Regional Centre for the Promotion of Environmental Planning and Applied Studies (PEPAS), Sardang, Selangor and obtained information on its activities. I met with Dr. Paul Guo, Director and staff and received important information on the Centre’s activities in the area of systems approaches in environmental health management in the global region.

I flew out from Kuala Lumpur on the afternoon of October 7, 1988 to Singapore, where I connected with my return flight to London and Dublin.