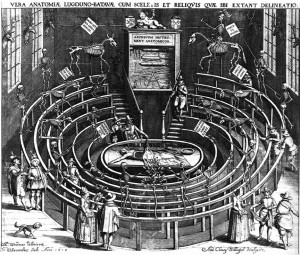 Niels Stensen (1638-86) was a prominent scientist and medical doctor of the seventeenth century.  He was the first to describe the endocrine glands of the head and argue for the necessity of mathematical description in biology.  He carried out original research on the anatomy of the brain and laid the foundation for three new sciences: palaeontology, historical geology and crystallography.

God’s purpose in creation was that humanity should seek God’s image and should mould itself after that image.  But after mankind had neglected the wisdom of God which is to be found in His handiwork, God took on the form of man so as to give us human beings an example within our own nature of the divine attributes which we must make into our own, so that we may be transformed and united with God.     (Pålsson 71)

This is the true aim of anatomy, to lift up our gaze through the accomplished artistry of the body to grasp the value of the soul and, as a consequence of the wonders of the body and of the soul, to teach us to know and to love the Creator … What we see is beautiful, what we can deduce is even more beautiful, but the most beautiful of all is that which we do not know. (Pålsson 51)

One sins against the Majesty of God if one refuses to look at nature’s own work and if one is content with merely reading what someone else has written about it.  That is the way to conjure up for oneself different fanciful opinions.  It means not only missing the joy of beholding God’s marvels, but also wasting time which could have been used for something useful and to the benefit of one’s neighbour, by lapsing into all sorts of things which are unworthy of God.  (Pålsson 17)

For scientific research entails that one cannot keep the various areas isolated from each other but is obliged to bring many of them into one’s consideration at the same time.  And the longer one is occupied with the detail, the more elements one lacks in the whole and a more abundant area of research one finds in it. (Poulsen & Snorrason 116)

That which practice and possibly observation on animals have taught mechanics, that to ease movement they should lubricate the things to be used with a greasy fluid, has been provided for by the most ingenious of all mechanics in the most perfect way from the beginning in the creation of animals.  Mechanics have seen that if between that which is to be moved and the fixed surface across which the movement is to take place a third substance is inserted, which is easier to move, then the work proceeds much more conveniently, and so they ease rotation by applying a fairly greasy fluid to the axle around which a wheel revolves, in a similar way as they launch a ship into the water by using rollers placed beneath it.  So too they carry out other movements with less effort, of which we have many examples everywhere in workshops, when they separate the stationary surface from the moving one by an intervening fairly greasy fluid.  But in the self-acting body of animals all this is done even more ingeniously, or rather more divinely; here both the fluid produced and the manner in which it is produced show a far greater skill.  For the parts are so ordained that the fluid concealed nearby, as if in a store-chamber, is squeezed out more sparsely or more copiously according to the greater or less use there is for it, we ourselves not even being aware of it, for after it has completed its function it is then carried away to other parts.  Thus, in the mouth the movements of the parts are eased by the incoming saliva; thus swallowing is eased by the slippery fluid which by that which is to be swallowed is squeezed out of the glands distributed below the mucous membrane.  With the same intention the inside of the whole intestinal canal is coated with mucous.  But above all this is seen most neatly in the eyes; for here some special ducts reveal themselves, both some which supply the fluid intended to assist the movements of the eyelids, and others which carry away the same fluid elsewhere …(Poulsen & Snorrason pps 85,86)

Nicolaus Steno 1638‑1686: A Re‑Consideration by Danish Scientists, edited by J.E.Poulsen

Never refuse to look at nature’s own work