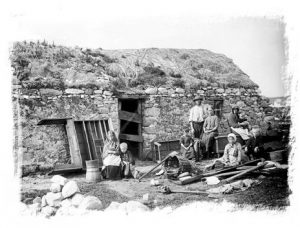 In 1980, Liam Dolan, after extensive, exhaustive research, published his epic work entitled, “Land War and Evictions in Derryveagh” (1).This present effort is a Review of that Book, primarily for the benefit of those who are descendants or relatives of the 47 families cruelly evicted over a period of three days in April of 1861 in Derryveagh, Electoral District of Gartan, Donegal, Ireland. Our purpose is to acquaint them with the existence of this work wherein they can read the full tragic story. Many of these descendants are in Australia, others in New Zealand, some still in Ireland and a few in America.
Mr Dolan begins his book with a note that perhaps the complete story of this episode may not be known because of the dispersion to Australia (The Derryveagh Diaspora) of the descendants of these 47 families. Hopefully, any such descendants will contact this website to recite the traditions in their families that have been related from generation to generation and supply the information that eluded the author. The author of this book has, in that work, painted a vivid word picture of the setting and the terror, agony and sorrow so well that the reader is transported back in time to the shores of Lough Barra and the mountains of Derryveagh to become a witness to these events described by one eye witness as “indescribable”.

Early in the work Mr. Dillon introduces John George Adair, the principal protagonist in this dramatic tragedy. Adair, of Scottish descent, was a well to do land speculator from Queen’s County, who, on visiting the District in 1857, observed that “He was enchanted by the surpassing beauty of the scenery”(2) In August of that year, we learn that he made his first purchase of property in the Glenveagh area. He later acquired over 28000 acres to create the Adair Estate. This included Gartan, Glenbeagh and Derryveagh. After the initial purchase in the Glenveagh area, Adair began building up his estate gradually and in doing so he purchased what is termed “fee-farm” rights to Derryveagh. This gave him the right to receive from the grantor all the rents collected from the Derryveagh tenants, but not ownership of the land or the so called “sporting” (hunting and fowling) rights.(3)

The failure to take title to the land and obtain “Sporting Rights” triggered an incident that might have been a contributing factor in Adair’s decision to clear out the Derryveagh tenants a few year later and in so doing to wipe out the hopes, dreams and fond memories of 244 human beings. It so happened that a year after he purchased the right to the rents of the Derryveagh tenants, he decided one day to indulge in his favourite sport of fowling on “his” Derryveagh property. About a dozen or so tenants resented and resisted what they regarded as a trespass on “their” land.  They proceeded to beat the bushes to spoil his sport and finally created a ring of persons at 50 paces around him and maintained that ring when he would move. This action infuriated Adair and he threatened them with his fowling gun. As he left the scene, he informed the tenants that “They would pay dearly”. Eventually, that prediction came true, not just for the 12 present but for the entire Derryveagh population of 47 families. In 1859, Adair acquired title to all of Derryveagh and was in a position, if he so desired, to carry out his threat.

In Chapter III, Mr. Dolan tells us that all the heads of families in the Derryveagh District presented themselves to Adair in Glenveagh Cottage on December 20,1860 so that he might personally accept their rent. He, however, had another motive and that was to inform them, one at a time, that he was contemplating “Rearranging the farm boundaries”. These dreaded words gave them the first inkling of the evictions that would occur early in the following year.
On St. Patrick’s Day in 1861, Adair obtained a Writ of “Habere” giving him the right to take possession of the land and houses in Derryveagh.(4) .  The stage was set for the drama that ensued. Adair, fearful that he might meet organized resistance, demanded and received a force of a 203 man Constabulary and “Inspectors” (5) to carry out his vicious plan. In addition, he hired a 10 man “Crowbar Brigade” from County Tyronne all for the purpose of carrying out his evictions. (6) The terror was executed between the Eighth and Tenth of April 1861.

At Page 117, Mr Dolan relates the testimony of an eye witness , apparently a Reporter from a Local Newspaper (7) which, in the story of the agony of the widow McAward, encapsulates the heart-rendering agony of the 47 families evicted. It reads:
“The family of the Widow Mc Award was the first to face the terror of the Crowbar Brigade. The Sheriff, accompanied by Adair’s new Estate Manager, approached the house where the poor Sixty Year old woman lived with her six daughters and one son and ‘Long before the house was reached, loud cries were heard, piercing the air and soon the figures of the poor widow and her daughters were observed outside the house where they gave vent to their grief in strains of touching agony. Forced to discharge an unpleasant duty, the sheriff entered the house and delivered up possession to Mr. Adair’s steward, whereupon a Crowbar Brigade of six men who had been brought from distance immediately fell to with right good will to level the house to the ground. The scene became indescribable. The bereaved widow and her daughters were frantic with despair and throwing themselves on the ground, they became almost insensible, and bursting out in the old Irish wail – then heard by many for the first time – their terrifying cries resounded along the mountains for many miles. They had been deprived of their only shelter – the little spot made dear to them by association of the past – and with bleak poverty before them and with only the blue sky to shelter them, naturally they lost all hope and those who witnessed their agony will never forget the sight.'”

The official Derryveagh Eviction Report tells us that there were 46 houses from which 47 families were evicted. 159 children were put out on the road. 28 homes were unroofed or levelled with only 4 families temporarily readmitted. 11,602 acres of land were seized. The total number of persons having only the sky for their shelter was 244. The author continues to relate the sad tale:
“By two, Wednesday afternoon, the terrible work had been accomplished and a deathly silence descended over the whole area. The Derryveagh District had been cleared of people and Adair had accomplished what the ravages of the Great Famine had failed to do. (8) The Londonderry Standard of April 10, 1861 gives us the names and townlands of the victimized families. These are:

Connell Doohan and his wife.
Patrick Curran, his wife and five children.

Michael Friel, his wife and two children.
Robert Burke and his wife.

Manus Rodden, his brother and two sisters – all orphans.
Bernard Callaghan, his mother and brother.

John and Fanny Bradley – deaf and dumb – allowed to remain in possession at least temporarily.

Knocker Kelly and two others.

By April 13, 1861 some of the victims had left the District. Many found shelter with neighbours in defiance of Adair’s edict or with tenants on estates of neighboring landlords. Forty Two persons however, ended up at that last stop, the poorhouse or workhouse as it was called.(9) A Mr. Michael O’Grady, a Sydney, Australia representative of the London Insurance Company, together with others, founded the Donegal Relief Committee. Funds were collected for all in Donegal who would like to start a new life in Australia with the fund paying their passage and purchasing a farm for them. (10)
In January of 1862, many of the younger Derryveagh victims took advantage of this offer and departed for Australia, first by train to Dublin accompanied by Father James McFadden, the parish priest in Falcarragh. He later became famous as the Patriot Priest of Gweedore. Father Mc Fadden gave a moving farewell address at a dinner arranged for them in a Dublin Hotel. 143 persons from Derryveagh, now joined by 130 Gweedore residents, boarded the Steamer, Lady Eglinton, headed for Liverpool on the first leg of their journey. They later sailed to the Land of the Southern Cross where each family was given a plot of land to cultivate. Here they began a happier and successful life.(11) Their Descendants are numerous in this land of opportunity.

Mr Dolan tells us that John George Adair died of natural causes in 1885 and that his wife had the face of a large rock inscribed with his name and the inscription “Brave, Just and Generous”. One night, during a raging thunderstorm, a bolt of lightning struck the rock and sent it crashing in bits to the bottom of the lake. May he rest in peace.

Mr Dolan’s book is genuinely well done. As sad as it is, it memorialises an incident that is an integral part of the history of Donegal – yes, of Ireland itself. It is especially a part of the heritage of the present day descendants and relatives of the 47 families of beautiful Derryveagh.