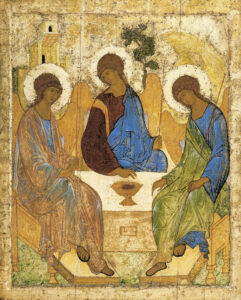 Ever since the creation of the world his eternal power
and divine nature, invisible though they are, have been understood

Now God has built the human form into the world structure,

indeed even into the cosmos. just as an artist would use a

The Cuban Missile Crisis of October, 1962 had the world face the prospect of

a nuclear catastrophe. With the withdrawal of the Russian missiles the U.S. embargo was

lifted and the immediate danger resolved. Pope John XXIII, who had made himself available
as an intermediary and appealed for peace during the crisis was entering his eighty-
second year. Battling a painful cancer he was overseeing the first session of the 2nd
Vatican Council. Having received the Balzan Peace Prize, been chosen as Time’s “Man
of the Year”, Time Magazine noted that “To the entire world Pope John has given what
neither diplomacy nor science could give: a sense of the unity of the human family.”
(Jan 4, 1962, p.54) With the conclusion of the first session of the council on December
8, 1962 John set about completing his final encyclical.
Pacem in Terris, published on Holy Thursday 1963, highlights the fact that “both in
living things and in the forces of nature, an astonishing order reigns” (n.2). This order is
reflected in human persons and underpins their inviolable dignity. This dignity is the
basis for a wide array of rights, for example, the right to life, worship and to form
associations. These rights have corresponding duties, particularly the obligation to
“contribute generously to the establishment of a civic order in which rights and duties are

ever more sincerely and effectively acknowledged and fulfilled (n.31). Pope John
addressed the basis for legitimate authority to rightly serve the common good, which is
the sum total of the conditions that allow persons to seek their perfection “more fully and
more easily”. Having contrasted the turmoil that exists among human beings with the
astonishing order of the universe! (n.3) he writes as follows:
END_OF_DOCUMENT_TOKEN_TO_BE_REPLACED